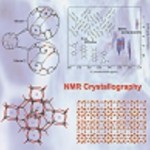 Crystallography is the study of the crystalline state of matter. The meaning is contained in the etymology of the word: κρυσταλλογραφ

σταλλος (krustallos, `clear ice’) and γραφο (grapo, `I write’). The modern inter­pretation of this term is widely construed as `the study of crystals.’ Crystallography since the `Traité de Crystallographie‘ of René-Just Haüy (Paris, 1822) has been based on a direct space description of crystals. There are many ways to study crystals, for example, by optical, thermal, mechanical or diffraction techniques. The relationship between the crystalline state of matter and its ability to diffract waves of properly matched wavelength has played and will always play a special role in this area of research. Nuclear magnetic resonance (NMR) spectroscopy has, however, from its earliest days, provided structural information on both periodic and amorphous compounds, ranging from specific inter­nuclear distances to complete structural models of complex materials and biomolecules. The term `NMR Crystallography’ presents a broad polysemy. To some, it represents a stand-alone structure elucidation method for single crystal, polycrystalline or amorphous compounds. For others, it is a source of additional structural information when compounds fail to yield crystals of sufficient quality or size suitable for single-crystal diffraction-based structure determination, or when powder diffraction patterns exhibit a too high degree of complexity for structure model elaboration. Some consider NMR, diffraction and modelling as a synergistic complementary set of methods. Others consider that the multiplicity of specific NMR experiments allows for the progressive build-up of topological sub-graphs of the crystal graph, and thus drives the structure model search. These are all established uses of magnetic resonance toward the investigation of the crystalline state.

The Commission on NMR Crystallography and Related Methods of the Inter­national Union of Crystallography was established at the Montreal General Assembly in August 2014. The commission envisions `NMR Crystallography’ in an even more expansive light, as being: the use of the spin degrees of freedom of the magnetic resonance phenomenon to study the crystalline state of matter. As NMR may also be applied to the liquid state, it may also be used to study crystal genesis. The increasing profile of NMR in the crystallographic community is also nicely evidenced by an inspection of the planned lectures and microsymposia scheduled for the 24th Congress & General Assembly of the Inter­national Union of Crystallography, to be held in Hyderabad (August 21–28, 2017).

The contributions to this special issue of Acta Crystallographica Section C serve as an excellent introduction to the power and scope of NMR crystallographic methods and applications. The issue begins with two insightful review articles, one from Stebbins and co-workers on looking at short-range order in paramagnetic samples, and one from Harris and co-workers on in-situ techniques for time-resolved monitoring of crystallization processes.

NMR crystallographic methods have proven to be popular in characterizing organic co-crystals, particularly those with an active pharmaceutical component. Three contributions explore this area. Brown and co-workers describe the application of advanced two-dimensional solid-state NMR experiments to elucidate the role of weak inter­actions in a co-crystal of two fungicides. Kerr et al. have applied related methods to determine the crystal structure of a co-crystal of naproxen with picolinamide. Vigilante and Mehta report their 13C solid-state NMR work on co-crystals of caffeine and theophylline.

It is important to point out that there are many flavours of NMR crystallography, and many applications combine the information available from many techniques to gain structural insights. The information obtained from X-ray diffraction is typically used to its full potential, in combination with the additional information obtained from NMR. Computational chemistry, often in the form of density functional theory (DFT) calculations, is also often incorporated to the refinement protocol to obtain final structural results in best agreement with all available data. For example, Szell et al. report on a combined NMR, X-ray and DFT study of halogen-bonded frameworks featuring nitro­gen-containing heterocycles. DFT also plays a key role, along with 14N NMR, in the report from Alonso and co-workers on inter­molecular inter­actions in AST zeolites. Laurencin and co-workers describe the prospects available via 25Mg and 43Ca NMR spectroscopy in low-coordination-number organo-complexes with the help of DFT methods. Mali reports on the ab initio crystal structure prediction of magnesium (poly)sulfides, and on how the calculated NMR parameters may be used to distinguish between possible structures.

Nishiyama and co-workers describe a beautiful example of the power of combining the information available from electron diffraction with that of NMR spectroscopy to report on crystalline polymorphs of organic microcrystalline samples. Inorganic aluminophos­phates and layered silicates are explored in eloquent and insightful contributions from Ashbrook and co-workers and from Brouwer et al. Finally, an excellent example of the application of NMR crystallography methods to a metal–organic framework is provided by Pourpoint and co-workers, wherein carbon–aluminum distances are measured using advanced techniques.

This collection of papers provides a broad perspective on the diversity of NMR crystallographic methods and applications. It may be useful to keep in mind some of the particular advantages of NMR methods, including, for example, their sensitivity to H-atom positions and weak inter­molecular inter­actions, and their capacity to characterize disordered and noncrystalline samples. The continuing advances in NMR technology, pulse sequence development and robust structure refinement protocols, which include data available from all available sources, all bode well for the future of this exciting field.