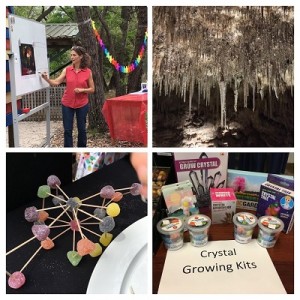 The Society of Crystallography for Australia and New Zealand (or SCANZ) have a great history of holding our national meetings in rural (regional) locations.  Known as the CRYSTALS meetings, past conferences have criss-crossed though the Australian continent as well as making a couple of trans-Tasman trips to New Zealand http://scanz.iucr.org/events.

It has been realised that having our meetings in regional locations gives SCANZ a fantastic opportunity to hold outreach events promoting crystallography to audiences who get little in the way of public science events.  Australia and New Zealand have highly urbanised populations (75 % of Australians and 85 % of New Zealanders live in cities) and are treated to a large range of science events.  However, those that live in regional areas don’t have such ready access to such events and are often a ‘missed out’ audience.  With SCANZ’s history (we started out as ‘Bush Crystallographers’) and the fact that we bring some great international and domestic invited speakers to our meetings, through schemes like the 1987 lecture fund, there is great opportunity to hold public science events in the regional locations of our national conference visits.

With that in mind, and that our CRYSTALS 31 https://crystal31.com/ meeting was being held in the wonderful Margaret River area, we organised our first public outreach event in conjunction with the conference.   ‘Science at the Caves’, was a mini-science festival held at Ngilgi Caves https://www.margaretriver.com/members/ngilgi-cave/ just before the conference kicked off on the 3rd December.

With the aim to explore the connections between crystals and caves, we had talks from invited speaker Ulrike Troitzsch (Australian National University) on her coral research (the starting story for calcium carbonate) as well as Andre Courtis a local cave guide. As well as hands-on activities demonstrating crystallography to everyone.

Supported by the conference chair and SCANZ executive, the hope is now for each future CRYSTALS meeting to have a public outreach event and to build up sci-comm expertise in the crystallography community. 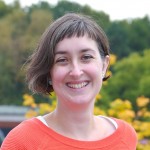 Long after the lights went on in the PETRA III Max von Laue experimental hall on the DESY campus, and the 14 beamlines became hives of activity, one corner has remained dark and seemingly forgotten. But there have always been plans for this corner of the Max von Laue Hall, and now those plans are taking shape. This hutch, situated directly behind the EMBL crystallography beamline P14, will house P14.EH2, a new experimental endstation which will cater for time-resolved crystallography experiments. In the autumn of 2016, EMBL group leader Thomas Schneider and Professor Arwen Pearson from the Centre of Ultrafast Imaging (CUI) at the University of Hamburg, were successful in securing a grant from the German federal government which in part provides funds for designing and building the endstation. Since then basic designs for the instruments have been decided, the first bits of equipment ordered and positions advertised for postdocs to help construct and run the endstation. The group hope to be able to welcome friendly users by the end of 2018. So how about some details?

Why a new endstation?

PETRA III produces some of the most brilliant and intense X-rays on the planet. The EMBL macromolecular crystallography beamline P14 is optimised to create a tight and parallel beam. With so many photons reaching the sample at the same time, scientists can start to watch the structural changes a protein goes through during a reaction, rather than a time-averaged snapshot as we are familiar with in traditional crystallography. Schneider, Pearson and their teams have already used P14 to do these types of time resolved crystallography experiments, but the set-up is not ideal in the long run.

The hutch for P14.EH2 sits directly behind P14 and the new endstation will be fed by the same X-ray beam. Each time-resolved experiment will need a different instrumental set-up, optimised to the type of results the scientists want to achieve. Having a separate hutch dedicated to the complicated time-resolved set-ups means that the regular operation on P14 doesn’t need to be interrupted and the scientists can take time to plan, design and build their set-up before pressing the button to allow the X-ray beam into the hutch. “The idea is that the set-up will be very flexible and modular” explains Wellcome Postdoctoral Fellow Briony Yorke (@BrionyYorke), who is working with Pearson on the endstation. Due to the tight angle that the X-ray beam leaves the PETRA III storage ring, the other beamline hutches and endstations are narrow, with access to equipment only possible by climbing over and under beamlines and detectors. The nature of the time-resolved experimental set-up means that access has to be easy and comfortable, and this was a major consideration during the design process. (See the project webpage http://www.embl-hamburg.de/services/mx/P14_EH2 for more details on the hutch layout design and specifications.)

What methods and hardware will be available?

Time-resolved crystallography works by taking a series of snapshots of a molecule such as a protein in quick succession to build up a movie of the protein’s structural changes during a reaction (see also: Taking crystallography to the fourth dimension). In practical terms, the X-ray beam has to be interrupted to create many successive images. “The trick is to turn the X-ray beam on and off faster than the process we are interested in” explains Briony. “The current shutter on P14 is a milli-second shutter, so the only possibility to look at shorter time slices is to get the detector to count for a shorter time period by repeatedly turning it on and off, since we physically cannot open and shut the shutter fast enough.” On the new endstation, a circular metal disc with pattern of holes stamped in it called a chopper will repeatedly ‘chop’ the X-ray beam, breaking up the signal to provide the sought after shorter time slices.

Briony’s particular interest is Hadamard time-resolved crystallography, a method she developed during her PhD, which will be an available option in the new set-up. While a chopper for standard time-resolved crystallography experiments may have a single hole in it, creating an interruption every, say second as it rotates through the beam, Hadamard choppers require a much more intricate pattern of holes. This will create many more interruptions, resulting in more data per crystal, and a more detailed ‘movie’ of the protein dynamics.

“The choppers pose quite a challenge” says Briony. “During experiments they will be spinning at very high speeds (several 1000 rpm), so they have to be cooled with water and placed under a vacuum, and shielded in a bullet-proof case something goes wrong!” Another key bit of equipment that will be found in the new hutch will be a laser for initiation of the (bio)chemical process the experiment aims to study. “The laser impulse will be delivered with fibre optics” explains Briony. “This will enable a really precise initiation of the experiments” she adds.

What science will it be used for?

“We are interested in looking at structural changes within proteins that happen during a chemical reaction, for example in an enzyme. The rate determining steps of these reactions happen on the microsecond to millisecond time-scale which P14.EH2 is designed to handle. We want to provide a regular service for people interested in exploring protein dynamics” says Briony. She will be using the time-resolved crystallography endstation, for example, to investigate how cataracts form in our eyes. “Cataracts form when proteins in our eyes start to stick together. But we don’t know what triggers this process. If we can get a picture of how and why this happens, we might be able to design medication to prevent them forming or even reverse the process” she says. P14.EH2 is likely to be interesting for a whole range of applications – from biotechnology to medicine. “For example, we could use the endstation to understand how some bacteria make crude oil, or eat plastic” explains Briony, “or gain a better understanding of how enzymes interact with medicines in our bodies. And all this evidence can be used to help build better computer simulations of molecular motions” she concludes.

Any day now the first instruments should arrive and the instrumentation group at EMBL can start constructing the endstation. Visit the project webpage for regular updates on their progress! 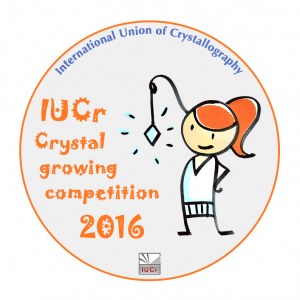 How do you encourage youngsters to think about crystallography? Start from the beginning and let them grow a crystal!

Crystal growth is such an important subject that it should be considered as a science in itself. It has its own journals and even an international organization, the International Organization for Crystal Growth, which coordinates the activities of researchers involved in the field.

Crystallization is still one of the most powerful purification methods in chemistry, used frequently at both university and industrial levels.

There is a tremendous amount of theory behind the science of crystal growth, and more and more sophisticated methods have been developed to understand the ever increasing numbers of resultant crystal structures. These discoveries can lead to new or better understood materials and properties covering many inorganic, organic and biological substances including drugs, nanostructured phases and many kinds of materials such as semiconductors, superconductors, magnetic materials and so on.

Don’t forget growing a crystal is also a lot of fun!

To coincide with the celebrations for the UN International Year of Crystallography 2014 (IYCr2014) and with the aim of raising awareness about this growing discipline, the IUCr launched a worldwide crystal-growing competition for schoolchildren (categories 15-18, 11-15 and under 11), which has now reached its fourth cycle. It aims to introduce students to the exciting, challenging and sometimes frustrating world of growing crystals. Students are invited to record a video to convey their experience to a panel of experts. The winning contributions in each category receive ‘Young crystal growers’ certificates and medals.

The IUCr also provides schoolchildren and teachers with educational material (brochures, videos, etc.) to explain the basic concepts of crystals and crystal growth and the importance of crystallization techniques in many fields.

The winners of the 2016 edition have just been announced (watch the videos here) and the 2017 edition launched; the deadline for video submission is 19 November 2017.

At the IYCr2014 Closing Ceremony, it was reported that national crystal-growing competitions were taking place in at least 34 countries. This is great news but we would like to boost this number and encourage more schools to participate in the international competition, and for this we need your help. If you want to inspire youngsters in what may become a lifelong love of crystallography, please do not hesitate to contact me at mz@iucr.org.