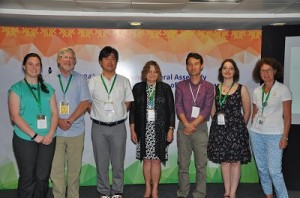 In general terms, crystallography can be thought of as a science of the very small, and space science as a science of the very large. For most crystallographers, therefore, it might take a bit of imagination to link the two. But crystallography does have a role in space science, and this was explored in a popular and thought-provoking special session in Hyderabad.  This came about as a result of a collaboration between IUCr and the Committee on Space Research (COSPAR) that was set up during the International Year of Crystallography; COSPAR and IUCr organised a capacity-building workshop on crystallography in space research in Puebla, Mexico in April 2016, and the IUCr session was organised as a follow-up to that. Its chair, Hanna Dabkowska (Vice President, IUCr 2017-2020) from McMaster University in Canada, had been one of the lecturers in Puebla.

The first talk, by NASA’s Dave Blake, had one of the most immediately engaging titles of any conference presentation: ‘Mineralogical Results from the Mars Science Laboratory Rover Curiosity’. The results he presented came from the first in situ analysis of minerals on the surface of Mars. The rover vehicle Curiosity is the largest exploration vehicle to have yet been landed on the surface of the ‘red planet’. It collects small specimens of rock and dust from the Martian surface to analyse using its 10 complex instruments; the initial aim of all these experiments was to answer the question ‘has it ever been possible for Mars to support life?’ As the Martian environment bears some similarities to those that probably existed on Earth when life first emerged there 3.7 billion years ago, a positive answer to this question would have important implications for theories of the origin of life. It landed in a crater named Gale in August 2012 and will remain on Mars for about two more years.

Blake explained that the ‘Swiss army knife’ of experiments carried by Curiosity includes a diffractometer about the size of a large briefcase. This instrument, which has been named CheMin, is being used to analyse bedrock from Gale and materials taken from the sides of Mount Sharp, a 3-mile high mountain (more accurately, mound of rubble) in the centre of the crater. Briefly, X-ray diffraction patterns from these minerals were consistent with the theory that the rover had landed at the end of an ancient river system and that the environment had gradually dried out and oxidised over geological time. If this is correct, Curiosity’s mission has already succeeded: Gale Crater is ‘an environment that could once have supported some form of life’. If you like, you can explore the data for yourself; it is all free to download.

The next two speakers, Tomoki Nakamura from Tohoku University, Japan and Helen Maynard-Casely from the Australian synchroton site, ANSTO, took crystallography even further afield by presenting, respectively, studies of minerals from small asteroids and from Saturn’s moon Titan. The small asteroids were the first planet-like bodies to be formed in the Solar System; Nakamura uses both X-ray crystallography and basic mineralogy to analyse samples of dust and debris that have been returned to Earth from one of these, the oddly shaped near-Earth asteroid Itokawa, by the Hayabusa spacecraft. His group has been able to piece together a ‘life history’ for this asteroid from the point when it was formed over 4 billion years ago. This involves intense internal heating and cooling followed by an impact with another space body that shattered it into many fragments; many of these fragments then re-accreted to form the smaller, peanut-shaped object we see today. This project is part of the Japanese-led ISAS Small Body Exploration Strategy to analyse the structures of small asteroids and meteorites, which is expected to last well into the 2020s.

Maynard-Casely began her engaging talk by reminding us of Blake’s comment that CheMin, on the Curiosity Rover, was the only diffractometer located outside the Solar System and of Nakamura’s comments about the complexity of returning samples to Earth from Itokawa, which is far closer to Earth than Saturn. Studying the materials on Titan’s freezing surface, where the temperature is always close to 90K, is therefore very difficult. This surface consists of ‘lakes and seas’ and areas that are covered by crystalline residues analogous to those seen on dried-up lake beds. But the environment is far too cold for water: remote analysis of samples obtained by a small ‘lander’ jettisoned from the Cassini space probe identified high concentrations of benzene and ethane, and a benzene crystal form with a shorter bond length than normal benzene crystals.  Maynard-Casely mixed the two compounds in her lab in conditions that mimic those on Titan, and formed a novel material: a co-crystal with ethane molecules inhabiting the channels between the benzene rings. She is beginning to produce a ‘mineralogy’ of organic materials thought to exist on icy moons like Titan.

The formal session ended with presentations by Yuki Kimura from Hokkaido University, Sapporo, Japan, on the formation of dust particles under micro-gravity and by Giuditta Perversi, a Ph.D. student at Edinburgh University, Scotland, on the low-temperature properties of magnetite. They were followed by a lively discussion; it is clear that the collaboration between COSPAR and IUCr has many years to run.