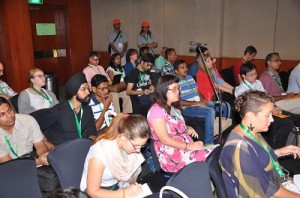 One of the most interesting series of sessions at IUCr has taken the overall theme of ‘crystallography in emerging nations’. Out of these, the one held on Saturday afternoon – ‘the role for development in the BRICS countries’ – will be of most interest to crystallographers in the host nation, India. The acronym BRICS stands for five large middle income countries: Brazil, Russia, India, China and South Africa. These disparate countries nevertheless share some important characteristics. They are economically important with large populations (India and China are the two most populous countries on earth) and on average fast-growing economies. Together, they account for about 40% of the world’s population. All have established communities of scientists working in many disciplines, including crystallography; this short session explored how they could work together more.

The session began with a short introduction by two South Africans, Jean-Paul Ngome Abiaga, who is now based in France working in UNESCO’s Capacity Building in Science and Engineering section, and Andreas Roodt from the University of the Free State. They described current initiatives for promoting cooperation between the five countries, including the BRICS Scientific, Technological and Innovation Framework Programme for funding multinational research and innovation projects. Modelled on the European Union’s Framework programmes if on a much smaller scale, this supports projects in 10 thematic areas; the two that are of most interest to crystallographers are ‘materials science, including nanotechnology’ and ‘biotechnology and medicine’. Applications should include partners from at least three BRICS countries. This is a promising scheme, but one with undoubted bureaucratic ‘teething problems’: its first call for proposals closed in August 2016, but the first grants are only now being awarded.

One senior scientist from each country then took to the floor to present some aspect crystallography there. The Russian representative (a late replacement for Mikhail Kovalchuk) described her country’s long history in the subject, which goes back to Evgraf Fedorov’s derivation of the 230 space groups in 1891. Distinguished crystallographers of the Soviet era include Alexey Shubnikov, who was one of the founders of the IUCr. Since the 1990s, Russian science, like much of Russian society, has turned west towards Europe and Russia is a key participant in (for example) the European XFEL project. Separately, Alexander Blagov from the Russian Academy of Science in Moscow described research at one of Russia’s own ‘mega-facilities’, the Kurchatov Synchrotron Radiation Source.

Marcia Fantini from the University of Sao Paolo in Brazil focused on opportunities for crystallographers in her country today. The only synchrotron light source in Latin America is based there, a second is under construction and there are 17 research groups in the country with crystallography as their principal focus. The Chinese perspective was presented by Xiao-Dong Su from Peking University, Beijing, who remembered hosting the then frail, 83-year-old Dorothy Hodgkin among many hundreds of delegates at the 16th IUCr congress there in 1993.  Chinese crystallography has developed rapidly since then, following the rapid growth of the Chinese economy, and many structural scientists are returning from positions in the US, Europe and Japan. There are plans to update at least one of the three Chinese synchrotrons, and to build a free electron laser facility. South Africa is the only BRICS country not to have its own synchrotron, and, indeed, there are none in Africa. However, as Susan Bourne of the University of Cape Town said, its crystallography community is ‘small but very active’. And it, too, has a long history, going back to Reginald James, a professor at the same institution who had studied under W.L. Bragg in Manchester, UK. His students in South Africa included Aaron Klug, who was to win the 1982 Nobel prize for chemistry for structures of protein-nucleic acid complexes. It must be admitted that James is best known internationally as a member of Ernest Shackleton’s ill-fated expedition to the South Pole.

The Indian slot, taken by A. Nangla from CSIR in Pune, took a rather different form. Rather than presenting crystallography in India, he described a problem that he thought scientific collaboration between BRICS countries might contribute to solving: the often-quoted gap between basic research and application in the ‘real world’. This gap is bridged faster when there is a recognised need for the technology (‘market pull’ rather than ‘technology push’). He suggested that it might be particularly useful for BRICS crystallographers to collaborate in some specific areas with known applications and where they have established research strength, and cited MOFs as an example. These have many current and potential applications, including gas storage, photocatalysis and drug delivery.

These talks were followed by two shorter ones by younger scientists from India and Russia, describing research in crystal growth and hydrogen bonding respectively, and a ‘perspective on the BRICS initiative’ presented by three South African PhD students. The meeting ended with a round table discussion with a panel that included John Helliwell from the University of Manchester, UK, as well as the speakers. Almost all contributions were very positive about the potential for collaboration between the countries although there was some disagreement about the form that any grant programme should take, and there was much support for delegates from other African countries where crystallography is less advanced. If the BRICS initiative is handled well, there are clearly many opportunities for it to support crystallography and other structural sciences throughout the developing world.