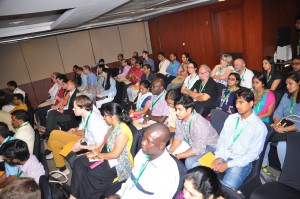 Every IUCr congress includes three plenary lectures by distinguished scientists from different areas of crystallography. The first plenary of the 2017 meeting was given by Professor Susumu Kitagawa, the director of the Institute for Integral Cell-Material Sciences (iCeMS) in Kyoto, Japan. He was introduced by the current IUCr President, Professor Marvin Hackert of the University of Texas at Austin, Texas, USA.

Hackert began with a potted history of Kitagawa’s research career, which started in the 1970s with a PhD in hydrocarbon chemistry at the University of Tokyo. Apart from a year at Texas A & M University he has spent his entire career in Japan, moving first to the private Kindai University in Osaka and then Tokyo Metropolitan University. He was appointed as a professor in the chemistry department of Kyoto University in 1998 and has remained there ever since. His time in Kyoto, in particular, has been marked by a succession of prestigious awards including, earlier this year, the 58th Fujihara Award. This yearly award is given by the Fujihara Foundation of Science to “researchers who have made significant contributions to scientific and technological advancement”.

Kitagawa began by dedicating his lecture to a great French materials scientist, Gérard Férey, who had made significant contributions to the crystal chemistry of porous solids and had sadly died a few days before the start of the meeting at the age of 76. He introduced the main part of the lecture by referring to the pressing need for novel materials in order to maintain the world’s rapidly growing population while remaining within ecological limits. Gases have an important role to play here, as energy sources and in manufacturing, but they also have disadvantages: they are very difficult to control and particularly to store. Porous materials can hold and store gases, and transport; Kitagawa has spent much of his career studying novel materials known generally as porous coordination polymers (PCPs) and a sub-class of these, metal-organic frameworks or MOFs.

In very general terms, these materials can be thought of as regular building frameworks on the nanoscale, with tiny, regularly-spaced ‘holes’ that can hold gas molecules. They typically form crystalline particles with each ‘side’ about 1mm in length with the repeat unit – the ‘block’ from which the particle is built up – about 1nm3. Strictly speaking a porous coordination polymer is defined as a compound with repeats that extend in one, two or most often three dimensions, and MOFs are PCPs with metals incorporated into the framework.

Since the first MOFs were synthesised, three ‘generations’ of these materials have been defined. The structures of first-generation MOFs were very fragile and they could collapse after the gas they were holding was removed. Second- and third-generation MOFs retain their structure when gas is removed and are said to have permanent porosity. Their ‘very special’ properties combine some that are typical organic solids (like softness) with others that are more typical of metals (like crystallinity).

These soft porous compounds have many uses, including the storage and transport of dangerous gases. Kitagawa illustrated this point with a photo of an object that ‘[had been] a van’ that was transporting acetylene (C2H2) when the gas exploded; this could have been avoided if the acetylene had been stored in the pores of a MOF. Chemical separation processes such as distillation use an extraordinarily high proportion of the world’s energy resources, and these versatile compounds offer opportunities to make several of these more energy-efficient and thus ‘change the world’ .

Kitagawa ended his lecture with a rather complex exploration of some properties that can be altered by changing the nature of the metal and organic parts of a MOF. The novel ‘fourth-generation’ MOFs that are currently being designed have even more complex and varied properties that are affected by, for example, the material’s anisotropy, the number and nature of any defects and the pore size. And although they are generally crystalline solids at room temperature, they change phase to form liquids or glasses when temperature and pressure are raised; these, too, have interesting properties, and some powdery crystals re-form as spherulites when melted and then cooled. There are bound to be MOFs yet to be discovered that will have even more unusual and useful properties. In thanking Kitagawa for an excellent lecture that had held the attention of the large audience throughout, Hackert pointed out that there is still much to discover in this exciting field for today’s young scientists.