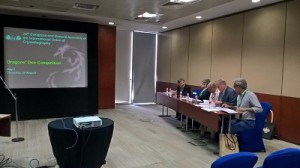 The TV show Dragons’ Den was invented in Japan but has become a worldwide brand. For anyone who has managed to avoid it so far – any residents of Mars, for example – it involves entrepreneurs pitching their business ideas to an audience of investors, or ‘dragons’, who quiz them in depth before deciding whether and how much to invest in the embryo businesses. Many variants of the Den have been spawned: the last to date, but by no means the least, in crystallography.

Regular #IUCr2017 delegates who are under the age of 35 and have no permanent academic position were encouraged to submit a proposal for research funding before the date of the congress, and the best of these have been chosen for presentation to a panel of senior scientists or ‘dragons’. The dragons’ task is then to choose the best ideas to receive INR 1,50,000 in grant funding. The idea proved very popular with younger delegates, and a large number of good proposals were received. No fewer than 43 were chosen to pitch their ideas in two sessions, 22 this afternoon (Thursday 24th) and the remaining 23 on Saturday morning.

The rules of the game were simple. Each finalist had two minutes to present his or her idea, interrupted by a large placard after 90 seconds and a final bell after which the presentation had to stop. The dragons – Ashwini Nangia, Massimo Nespolo, Amit Sharma, Christian Lehmann and Keith Moffatt – then had four minutes to grill the candidate.

Twenty-one candidates entered the Den on Thursday, as one was unable to attend at the last minute. The slick, fast-moving format and the eclectic nature of the students’ interesting ideas ensured that the session held the audience’s attention throughout. One or more presenters cited almost every technique that main meeting covers, except for exceptionally expensive ones: not surprisingly, neither high resolution electron microscopy nor free electron laser spectroscopy got a mention.

There were far too many presentations to describe here. Those that caught this blogger’s attention included a proposal to kick-start protein crystallography in Tunisia through collaborating with ESRF in Grenoble; a study of the mechanism of aldose-aldose oxidoreductases; and an exploration of the idea that a few bacterial species can incorporate arsenic into their DNA backbones in place of phosphorus.

The audience had not been told anything of what the dragons might have been looking for, but the questions that cropped up again and again gave some of it away. Many were quizzed about the references in their proposals; they had clearly been asked to cite at least two relevant research papers and to avoid self-citation. Many were asked exactly what they would spend the award money on if they won, which showed up ideas that were too ambitious or too vague. Some projects, however, fit the sum offered just right; the audience clearly warmed to Atahar Parveen, a postdoc in Hyderabad, who wanted to buy a computer so she could run simulations from home and spend more time with her young daughters. A few competitors were also caught out by being asked scientific questions linked to their proposals that they had not quite been expecting. 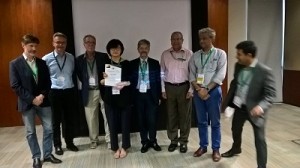 After the last candidate had made his pitch, the dragons retreated into another room to deliberate. This did not take long, and representatives of the event sponsors, STOE and Elsevier, then announced the two worthy winners. STOE, based in Darmstadt, Germany, has been manufacturing equipment for the ‘non-destructive’ analysis of crystals and powders since before X-rays were discovered, and now makes diffractometers; the global publishing giant Elsevier needs no introduction. Today, STOE’s prize was awarded to Nami Matsubura, a PhD student working in France, and the Elsevier prize to Joanna Wojnarska from Krakow, Poland. Both winners spoke well, clearly understood the science behind their ideas and described feasible projects. Matsubura’s project will be an extension of her PhD work, involving the synthesis and analysis of novel tellurates that might be used as components of electronic devices; she intends to use her prize for travel to a lab in Belgium. Wojnarska’s mainly computer-based project involves engineering novel non-centrosymmetric materials from highly symmetrical ‘building blocks’. Only the most promising molecules will be synthesised and crystallised.

The Dragons’ Den will be back on Saturday when the second set of candidates jostle to interest the dragons in their ideas. If you are reading this at the conference before then, that session is greatly recommended.