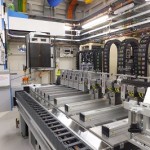 Synchrotron beamlines and their instruments are built to harness the photon beam power of synchrotron radiation (SR), which has special properties – ideally suited to providing detailed and accurate structural information that is difficult to obtain from conventional sources. The common modus operandi for such facilities is that users are allocated a short duration of beamtime, typically a few hours to a few days, in which to perform their experiments.

With technological advances in instrumentation, detection, computing power, automation and remote access, SR facilities are developing new modes of access, designed to increase speed, efficiency and throughput of user experiments, such as on the macromolecular beamlines at Stanford Synchrotron Radiation Light Source in the US and at the Diamond Light Source in the UK.

However, there are a class of experiments that are increasingly excluded by these developments, which nevertheless could greatly benefit from the application of SR. For example, some materials undergo very slow transforming reactions, while others take time to exhibit the effects of curing, ageing or repeated use. These processes can be subtle or take weeks to months or even years to either show gross manifestation or run to completion.

At present off-line processing with before and after SR measurements is the norm, but valuable structural information on growth, change and intermediate phases can be missed or indeed lost. There is therefore a clear need for a facility that allows slow processes to be studied. 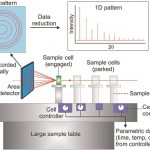 In a recently published paper [Murray et al. (2017), J. Appl. Cryst. 50. doi:10.1107/S1600576716019750] scientists report on a new purpose built LDE facility, which has been designed to address the needs of a wide and diverse range of scientific investigations. The new facility takes the form of an additional specially constructed end-station to the existing ultra-high-resolution and time-resolved powder diffraction beamline (I11) at Diamond. The new end-station is dedicated to hosting up to 20 long-term experiments (weeks to years), all running in parallel.

To demonstrate the effectiveness of this new facility, commissioning results from two contrasting science cases are presented. In the first, the slow in situ precipitation of the hydrated magnesium sulfate mineral meridianiite from an aqueous solution was followed. The hydrated phase is believed to be widespread on the surface of Mars and was formed inside a specifically designed low-temperature cell. In the second study, the long term stability of the metal-organic framework material NOTT-300 was investigated. This is a potential supramolecular material for greenhouse gas capture. Initial results show that the facility is capable of detecting phase evolution and detailed structural changes and is well suited for many applied systems and functional materials of interest. The emergence of new science from ongoing experiments is expected soon.